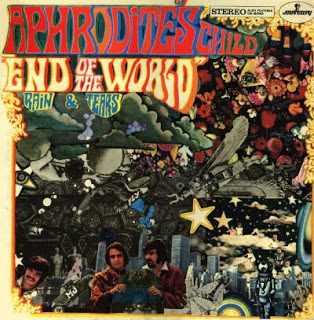 Aphrodite’s Child was Vangelis’ (Papathanassiou) and Demis Roussos’ first step to international fame. They have recorded 3 albums between 1969 and 1972 full of excellent pop, psychedelic and/or progressive rock tracks. This is their first album, featuring international hits like “End of the World” and “Rain and Tears”. 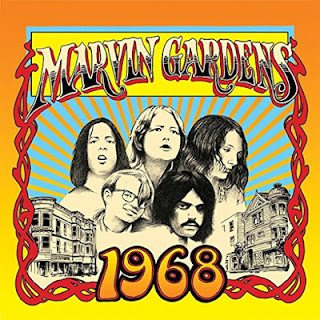 1968 includes virtually every note Marvin Gardens recorded, and provides a tantalizing glimpse at a uniquely wonderful group. With a powerful female lead singer, Carol Duke, on par with Janis Joplin and Grace Slick, and a versatile and mesmerizing band that goes from playful folk to Latin-tinged jazz vamps to searing, guitar-fuelled garage rave-ups, Marvin Gardens could have been a major artist if the stars had been aligned. 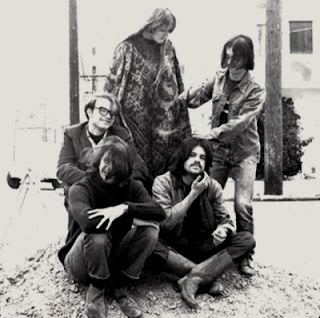 The sound of Marvin Gardens takes in many aspects, different strands and strains from multiple genres. There’s early American music hall, hallelujah gospel, one or two slivers of beat group action and of course the upsurge of blues and folk-rock based sounds that were par for the course for most US groups that would appear across the latter half of the 1960s. Some influences from what was then a highly-stylised cornucopia of sounds placed under the psychedelic umbrella can also be firmly detected here and there. However, in their quest to be counted, and to be heard, Marvin Gardens certainly aimed to put their own original spin on things. Imagine a more psychedelicised We Five jamming out with the Charlatans, Big Brother and the Fish and this will at least give some indication as to where the group were at in the sound department. In common with her more famous peer Janis Joplin, lead vocalist/guitarist Carol Duke also originally hailed from Texas (in Duke’s case Lubbock, the town famous for spawning Buddy Holly). Duke’s versatile vocal style exuded a similar swaggering sass, confidence and conviction that compares favourably with SFs other hollering heroine, the Great Society’s and Jefferson Airplane’s firebrand femme Grace Slick. Duke brought with her to the Marvin Gardens rehearsal pad lots of different and unusual song material, some of which had been in her family for many years, so out went the fledgling group’s “top forty” approximations and in came the likes of Hoagy Carmichael, Leadbelly, Odetta and others. And alongside guitarist Fred Waxler, organist Tim Hazen, bassist Michael Lindner and drummer Dave Ray Costuros the group would spend many hours rehearsing up these new songs, fashioning and honing them further in clubs such as the Purple Onion, the Lion’s Share and the Matrix, creating what can now be honestly regarded as a real lasting artefact; one that, after careful evaluation, must surely also be remembered as being among the finest late 60s sounds the city had to offer.

1968 kicks off with “Walkin’ Down The Line” said to be a Bob Dylan original... and we hear first a tremendously sturdy demo version, a terrifically urgent affair that builds and builds with an infectiously driving rhythm, groovily piercing organ fills and one of these solid, uncomplicated lyrics from the school of blues.
“Had the Charlatans been joined by Country Joe’s keyboard player and fronted by an earthy female singer, they might’ve sounded like Marvin Gardens…”  —Mike Stax, Ugly Things Magazine

experience on LP or CD from the  Guerssen 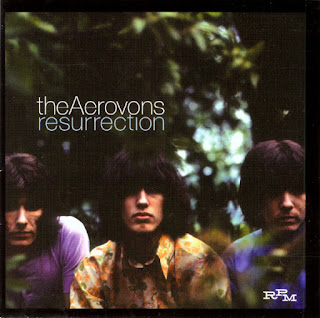 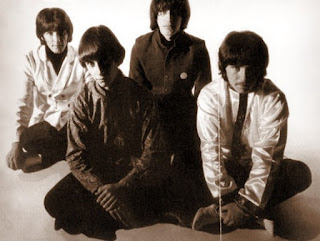 The Aerovons, often know as “the American Beatles”, bucked the trend of the British invasion and sought inspiration from England, then the creative hub of the music industry. Their leader and singer Tom Hartman wrote, and subsequently produced and recorded an album’s worth of material at Abbey Road while just 17 in 1969.Their Parlophone single “World of You” rightly gained cult status over the years and has subsequently recognised as one of the best of the era. Sadly band difficulties halted their progress. However in 2003 RPM finally released the their album “Resurrection” to universal acclaim with Rolling Stone calling it a “stunning album of bulls-eye Beatles pop… the Aerovons never got to be stars. Now they get to be heard.” Tom is making plans to release new material and after hearing “Stopped!” on the Strange Brew Podcast” we are extremely excited!

Enjoy:https://cloud.mail.ru/public/msMNzSkALxSk/The%20Aerovons69.rar
Posted by Folky at 4:26 AM No comments: 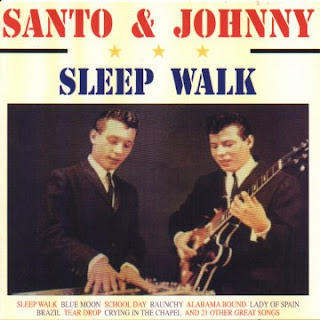 "Sleep Walk" has been draggin' around my head the last week. It's a beautiful instrumental ballad penned by the Italian-American brother duo of Santo and Johnny Farina. This track, reached number 1 on Billboard's Top 40 back in 1959. When was the last time an instrumental hit was a number one?And what a dreamy track it is. Santo is an amazing slide guitar player, his slide guitar techniques are far ahead of any rock guitarist at the time. The haunting voice of the the steel guitar is in drenched reverb, with sparse-spacious accompaniments, allowing the beautiful melody to breath easily and gracefully. Santo is an incredibly tasteful player, using the full register of the steel guitar to create very textured weeps, giving the instrument a vocal, human like quality.

Enjoy:https://yadi.sk/d/qrnN9vSIieHYj
Posted by Folky at 4:37 AM No comments: 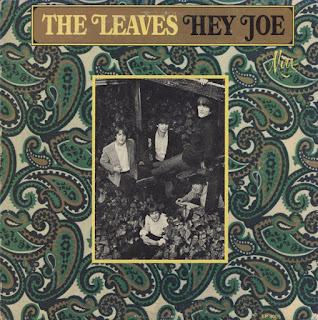 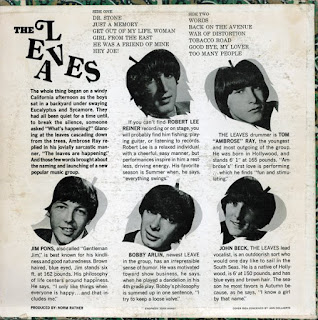 The Leaves was an American garage band formed in California in 1964. They are best known for their version of the song "Hey Joe", which was a hit in 1966. Theirs is the earliest release of this song, which became a rock standard. 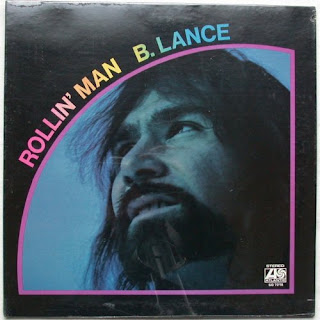 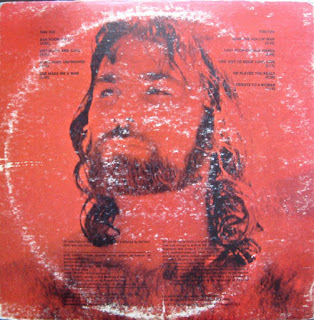 Rollin’ Man is the superior album, tamping down the previous album’s florid blue-eyed soulisms and focusing on a tighter rock groove. Lusty opener “Bar Room Sally” introduces Lance in a less self-serious mood; during the coda, he even provides the voice of “Sally” and kissy noises against a clattering, saloon-style piano. For all its goofiness, though, “Bar Room Sally” also sets the template for the level of songcraft throughout the album. Unlike First Peace, where even many of the stronger tracks seemed either underwritten or overly busy, epic rockers like “Something Unfinished” and “John the Rollin’ Man” are packed with hooks, but lean enough to keep them sharp and let them sink in.Lance’s taste for grandeur hadn’t abated entirely, however, as testified by the lengthy instrumental solos on the eight-and-a-half-minute-long “Hot Wood and Coal,” and the expansive, Neil Diamondesque pop balladry of “Last Stop Change Hands” and “She Made Me a Man.” Yet the limitations of the recording process seem to have inspired Lance. While First Peace at times sounded like a songwriter’s demo tape — a song for Aretha, followed by a song for Clarence Carter — Rollin’ Man is fully committed to Lance’s personal blend of influences and interests. Ever the professional songwriter, however, there’s nothing on the album so personal or idiosyncratic that it couldn’t be covered by a band like Three Dog Night or Grand Funk Railroad. The one exception is album closer “Tribute to a Woman,” a delicate, relatively elliptical hymn that barely runs over a minute 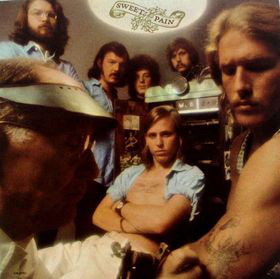 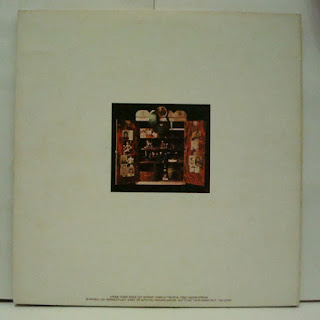 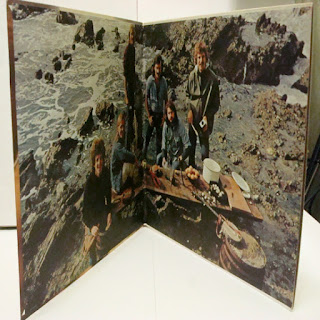 This band is a great example of early 70’s west coast rock n roll with sophisticated vocal harmonies and instrumental arrangements. And it just plain JAMS. Sounds kinda like a heavier version of CCR. Highly recommended if you can find it.


Enoy:http://dfiles.eu/files/rx1lyqn2r
Posted by Folky at 6:05 AM No comments: 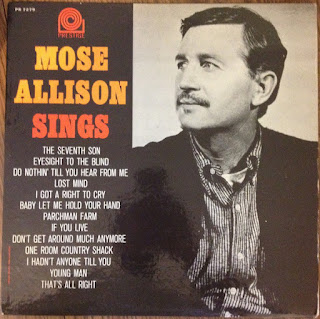 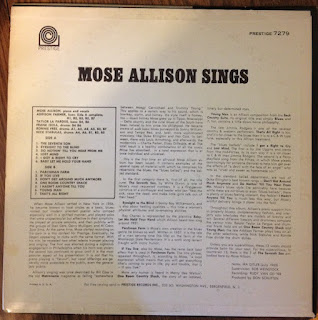 There are fewer Allison originals than one might prefer here; instead he takes on classic blues (Willie Dixon's "Seventh Son") and jazz (Duke Ellington's "Don't Get Around Much Anymore"). But the originals that are here (like "Young Man's Blues," which was covered by the Who) are worth the price of admission. The reissue adds four tracks and a revised running order, and highlights Van Gelder's flawless production.The 2006 Rudy Van Gelder remaster of MOSE ALLISON SINGS reminds listeners that Allison was churning out great songs and performances as far back as 1957 (and that he's been doing the same ever since). The artist's distinctive mixture of blues, jazz, dynamic piano playing, and witty songwriting plays loud and clear on this early offering. 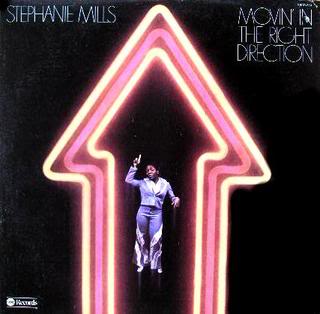 Born on March 22, 1957 in Brooklyn, NY, Mills honed her rich vocals singing gospel music at Brooklyn's Cornerstone Baptist Church as a small child. At age nine, she began appearing in the Broadway play Maggie Flynn. She was presented with first prize after winning "The Amateur Hour" talent contest six weeks straight at New York's famed Apollo Theater when she was nine. That success led to her being chosen as the opening act for the Isley Brothers, eventually becoming good friends with lead singer Ronald Isley. Many years later, Isley would manage and later marry singer/songwriter Angela Winbush, who co-wrote one of her number one R&B hits. Mills' debut album, Movin' in the Right Direction was recorded for ABC Records in 1974 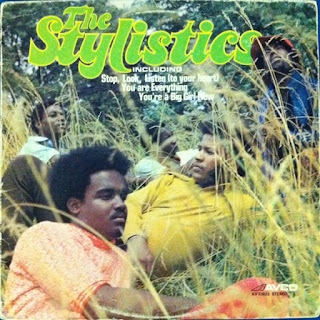 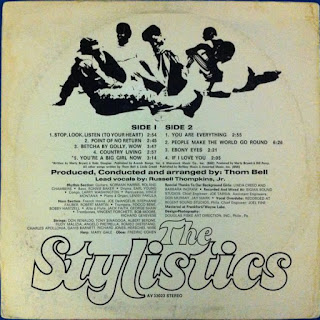 The Stylistics formed in 1968, when members of the Philadelphia soul groups the Monarchs and the Percussions joined forces after their respective band dissolved. Thompkins, James Smith, and Airrion Love hailed from the Monarchs; James Dunn and Herbie Murrell were from the Percussions. In 1970, the group recorded "You're a Big Girl Now," a song their road manager Marty Bryant co-wrote with Robert Douglas, a member of their backing band Slim and the Boys, and the single became a regional hit for Sebring Records. The larger Avco Records soon signed the Stylistics, and single eventually climbed to number seven in early 1971. 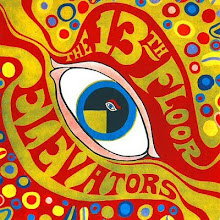 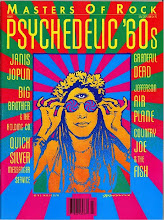 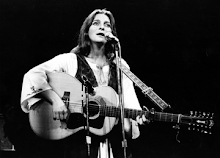 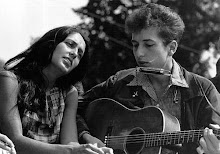 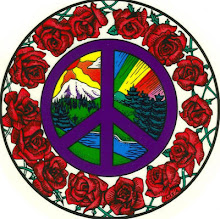 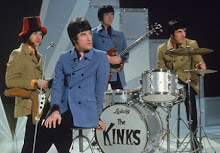